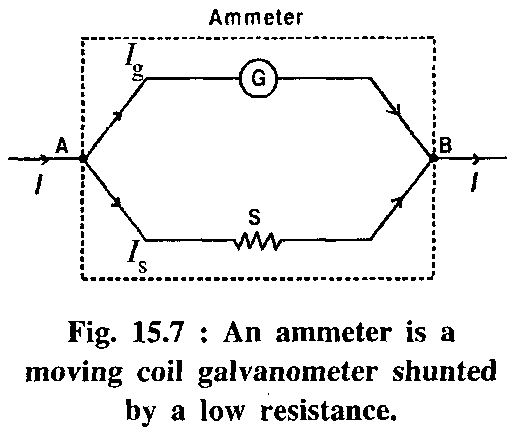 Ammeter is a very important instrument used to measure the current flowing in a circuit. It has variety of uses in science experiments because most often many quantities are related to direct measurement of current. In this article we shall discuss ammeter and its construction. I like to share this Ammeter Definition with you all through my article.

Secondly, the galvanometer gives a full scale deflection even when a very small current flows through it. Hence some arrangement must be made if large currents are to be measured.

Finally, the galvanometer coil is very delicate and easily gets damaged when a larger current flows through it. Therefore it is necessary to protect it from such damage.

Construction of Ammeter from Galvanometer

This relation gives the part of the total current flowing through the galvanometer coil. Also it enables us to determine the proper value of the shunt, when a galvanometer, through which a maximum current / can pass, is used to measure currentsupto I.

Example for Convertion to Ammeter

A moving coil galvanometer has a resistance of 20 Ohm and it gives full scale deflection when a current of 50 mA passes through it. How will you convert it into an ammeter to measure currents up to 20 A?

So, a shunt of approximately 20 ohm has to be connected in parallel to convert the above galvanometer into an ammeter to measure a current of 20 A.